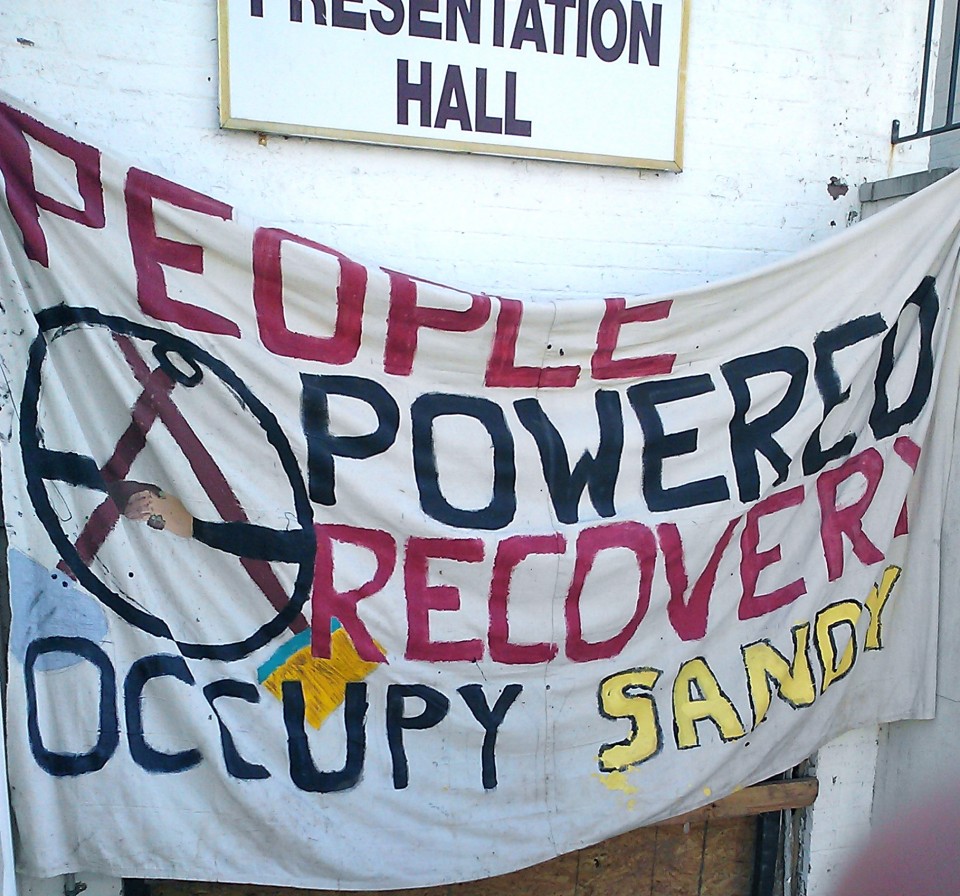 Into the Storm: Occupy Sandy and the New Sociality of Debt

By: Rana Jaleel
Table of Contents

In late October 2012, after the completion of this dossier, Superstorm Sandy wrecked much of the East Coast, including the greater New York City area. Now, nearly two months since the storm hit ground, thousands of New Yorkers still suffer from its effects. In the storm’s wake, Occupy Wall Street rapidly mobilized to form Occupy Sandy—the People’s Recovery Effort. Occupy Sandy drew upon the organizing and activist networks that crystallized in Zuccotti Park to offer on-the-ground support for devastated New York area communities. What follows is drawn from observations of Occupy Sandy activities and discussions with two Occupy members in late November, Alexandra (Aleks) Perisic and Amin Husain, who are dedicated to assisting Red Hook, Staten Island, the Rockaways, and other areas hard hit and still struggling in Sandy’s aftermath. While Alexandra and I spoke under fairly sedate circumstances, in a somewhat antiseptic student office at New York University’s Department of Social and Cultural Analysis, Amin cheerfully answered questions from the back seat of a sixteen-passenger van over a bumpy half-hour ride from Occupy Sandy’s hub at the Church of St. Luke and St. Matthew, in Brooklyn’s Fort Greene neighborhood, to a distribution center in storm-ravaged Staten Island.

It is nine o’clock in the morning on the day before Thanksgiving when I meet Amin at the church, whose pews are overflowing with donated goods—canned vegetables and granola bars, blankets and batteries, toothbrushes and tampons—that volunteers have already begun to sort and process for delivery. I watch an older man and woman enter the church’s spacious interior, and pause, looking up to the massive stained glass and then down again to people, purposeful and efficient in the pews. “This is so organized,” the man says to me. Then, “Does this have anything to do with what happened in the park last year?”

It’s an honest question and one that I alter only slightly before posing to Aleks and Amin: Why did Occupy take on disaster relief? Their answers are strikingly consistent. From the encampments to the flood zones, Occupy enacts an ethics and practice of mutual aid: a bi-directional exchange of knowledge, skill sets, and resources, a way of helping and being helped. “Mutual aid benefits everyone involved,” Aleks emphasizes, further noting that many volunteers in Red Hook are themselves people in need of assistance, whose homes and future prospects have been damaged if not destroyed by Sandy. 1

Occupy’s ethics of care or mutual aid are a critical dimension of the movement’s much-discussed embrace of horizontalism: in Aleks’ words, “the ability to mobilize existing energy and include all who want to contribute” and to mobilize the diffuse organizing initiatives that Occupiers pursued in the wake of the encampments. For Aleks and Amin, Occupy Sandy is no “second act” or opportunistic regrouping—rather, Sandy simply makes visible the work Occupiers do and have done each day: the binding together of people and organizations in emotional networks of care and accountability that extend the prefigurative politics of the encampments into the world at large. Neighborhood distribution centers continue Occupy’s work of creating and maintaining spaces that enable people to care for each other’s needs while challenging the scarcity logics of capitalism. Like the Occupy encampment libraries and kitchens, the neighborhood distribution centers are very basic and powerfully effective mobilizations of space to nourish bodies and foster communities.

I witness horizontalism and mutual aid in practice when we arrive at the Olympia Boulevard distribution center in Staten Island. People in need of water, food, cleaning supplies, baby formula—all the mundane necessities of daily living—already line the sidewalk as volunteers are ushered through the property gates for a quick rundown on what needs to be done. There are clothes to be sorted and folded in the clothing donation tent; on the building’s upper floor, donated supplies must be transported, processed, and displayed in the Occupy “store,” where people “shop,” free to take what and as much as they need. There are refreshingly few directions given. “This is your store,” an Occupier tells us. “Make it look the way you’d want a store to look.”

We oblige. Granola bars, shampoo, and a few children’s toys are somewhat artfully arranged. Presented with two large boxes labeled “2T-4T” and “I,” I learn the embarrassingly obvious lesson that diapers come in different sizes. We stack them in towers and lug the rest to a basement storage area, where an excess of donated goods is piled floor to ceiling: snow shovels, hammers, gallons of water, buckets of pickaxes, protective plastic suits and gloves, gas masks—even a couple of chainsaws with oil-muddied chains. Yet in the midst of such relative abundance, there are shortages. We run low on laundry detergent very early in the day and begin to ration what little we have, pouring capfuls of “Tide with Arm & Hammer” into single-serving Ziploc bags. A woman with two small children in tow looks visibly crestfallen when I tell her we’ve run out, but she lights up when a fellow “shopper” shares a spare baggie.

Small kindnesses like these flourish in the “People’s Store.” When knots of shoppers crowd the makeshift aisles, no one shoves or overloads her bags and carts with scarce goods. People share, swap, and wait their turns. A representative from the fire department enters in the midst of our lunchtime rush, asks “who’s in charge?,” hears the answer “no one,” and nonetheless arranges to donate twenty-five smoke alarms and twenty-five carbon-monoxide detectors. These are the behaviors and good feelings that mutual aid and horizontalist projects seem to generate, notwithstanding the inevitable thornier moments, the intrusions of “business as usual.”

During a shopping lull, Amin remarks that many Staten Islanders remain unaware of the “People Powered Recovery” effort; he thinks out loud about how nearby neighborhoods might be leafleted or otherwise informed. I ask him then how the people of Staten Island have perceived Occupy Sandy. I had just had an exchange with a local volunteer, who quickly and emphatically, albeit politely, explained that she and her husband were not “with you all” and “weren’t sure about what you all believe” but nevertheless was glad that “someone was in the neighborhood.” Need, in other words, compelled her participation in what for her was clearly an uneasy partnership. FEMA (Federal Emergency Management Agency), Red Cross, and “state” (in all its ineffable dimensions) failure to provide effective recovery services literally pushed people into the arms of Occupy. On a similar note, Amin recounts a recurring issue with storm-affected Staten Islanders complaining that people “not from the neighborhood” (i.e., residents of area housing projects) were coming to the store and taking “our stuff, stuff meant for us,” prompting another volunteer to ask facetiously whether Occupy intended to start checking papers.

Each of these anecdotes illustrates a collective and all-too-common anxiety, heightened in the storm’s aftermath, of how resources are distributed, of just exactly how people are expected to survive in a world where individuals are increasingly expected to assume costs that were once publicly shared. This anxiety powers Occupy as a movement, prompting Aleks and Amin to each stress plans to shift the focus from Sandy-as-disaster to Sandy-as-illuminator: an incident that “makes visible” the city’s entrenched, vast, and prosaic social and economic inequities, that again exposes the people’s need. I ask how Occupy plans to take Sandy as a public opportunity to think about infrastructure and development in ways that do not replicate or entrench social and economic divisions in New York City. Aleks immediately mentions debt and Occupy’s answer to it: Strike Debt, a coalition of Occupy groups united to combat all forms of bank-imposed debt.

Medical debt, mortgage debt, student debt, credit-card debt—debt is a leitmotif of American life. “It is obvious,” Aleks says, “that debt has replaced a social network”; debt is proffered as solution—in fact, the solution to any crisis. The official response to Sandy’s destruction has been just that: get a loan. As a recently released Strike Debt report documents, applications for individual loans are prerequisites for FEMA aid. 2

This is an especially frustrating and disheartening prospect when FEMA and other government agencies have been reportedly absent or outpaced by Occupy’s response on the ground. “The Red Cross delivered MREs [Meals Ready to Eat] to us, state employees were calling to volunteer, FEMA was asking how” to distribute aid, Aleks says, estimating that Occupy Sandy’s Red Hook outpost was at its height distributing two hundred meals, twice a day.

Occupy’s response to lackluster official aid predicated on loans and a state that has all but abandoned social welfare as prerogative or mandate is to return to the principles of mutual aid and horizontalism with an eye to establishing lasting infrastructural and community relationships that heal more than storm damage. On Staten Island, Aleks says, Occupy Sandy is looking to establish a long-term community center, a free legal clinic, and educational services. Similarly, in Red Hook, skill shares and repairs have been tentatively established at a local church, and Occupiers are researching whether the medical and other debt incurred by the affected in Red Hook and Staten Island might be purchased and eradicated à la the Rolling Jubilee.

If a “bright side” is to be found in the wake of Sandy, it lies in the renewed visibility of the Occupy movement and its attending precept of mutual aid as a viable alternative to state neglect and impositions of austerity. As neighborhoods and communities rebuild, horizontal conversations can continue to bear on social debates over infrastructure and the allocation and distribution of (what were once) collective resources—at least they will if Occupy has anything to say about it.

Find out how you can get involved with Occupy Sandy Recovery efforts by visiting: http://interoccupy.net/occupysandy/.

«
Not Your Academy: Occupation and the Futures of Student Struggles »