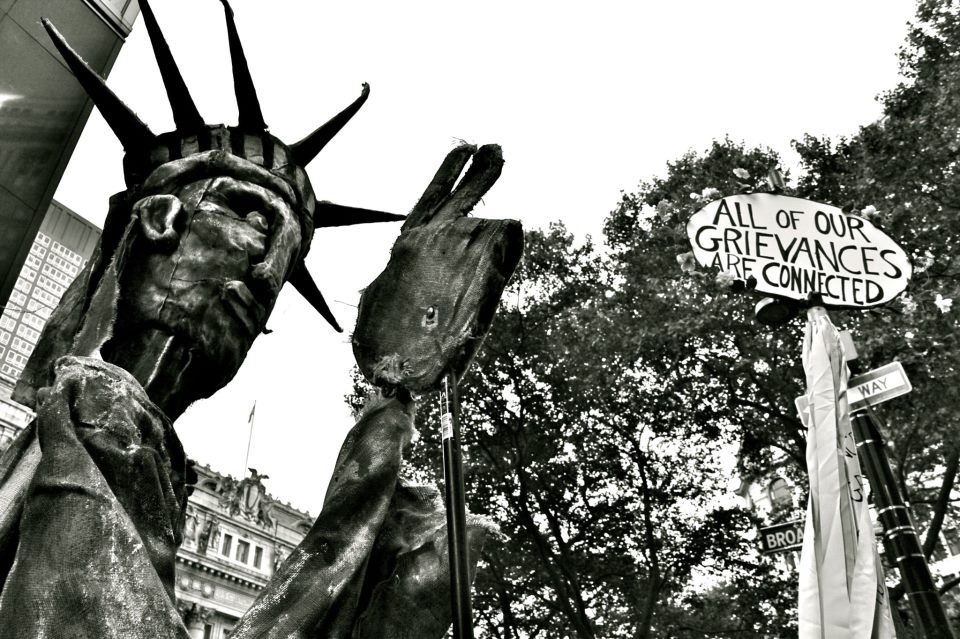 This dossier takes its cue from one of the Occupy movement’s bedrock slogans, “This Is What Democracy Looks Like” (though the catchword was first nurtured, as were many Occupy paradigms, tactics, and customs, in the global justice movement that came of age in Seattle in 1999). This proud assertion, stiffened by populist certitudes about the “99%” hypermajority, exercised a clear appeal to protesters. It is self-congratulatory, confrontational, and also quite articulate as a political statement. Not everyone has to believe the slogan to chant it. But what if it were taken up as a more literal goal? What if the Occupy model of horizontalism, explicated below, were to be pushed into every venue of civil society, eventually supplanting the roots of our representative democracy system? Who would gain and who would lose? How would our own institutions, organizations, and networks be transformed in the process? The radical innocence of Occupy allowed such questions to be asked. After more than a year of operations under its name, the record allows some provisional answers to be offered.

Horizontalism emerged as a working concept in Argentina, as part of the popular rebellions of 2001. Though an imperfect translation of the original horizontalidad, it has been adopted as a keyword for describing the decentralized, nonhierarchical process by which participants use consensus to build solidarity and arrive at decisions. This process has particularly deep roots in the US. Scholars who have researched the Indian roots of American democracy would trace it to the Iroquois longhouse. Its place in the annals of Anglo communalism is usually associated with Quaker culture, and, indeed, many of the protocols and rules for Occupy’s General Assemblies (open-to-all decision-making forums) came out of the Quaker-inspired Clamshell Alliance of the 1970s and 1980s. Horizontalism was also practiced within the civil rights and women’s movements as an alternative to the top-down leadership models of the Old Left. Anarchist groups have a long record of engagement with direct democracy and direct action, and the contribution of anarchist ideals and practices to Occupy of has been profound.

As a model of direct democracy, horizontalism could not be more remote from the representational model of “thin governance” enshrined in liberal democracies. Our societies are structured to limit the time that people have available for participating in general assemblies, yet they glorify the intervals allotted to watching three-hour sporting events. Representative democracy has delivered the best Congress that money can buy, reducing citizen participation to the act of pulling a lever every two years, or, at best, fund raising for a candidate’s war chest. For thirty years, neoliberalism has seeped into every civic molecule, pushing aside any memory of, or practical desire for, alternatives. Does horizontalism, with all of its implications, stand a chance against such deeply embedded customs? How far can it push the yearning for alternatives?

Contributors to this dossier were asked to gauge Occupy’s impact on the populations (and their issues) most adjacent to the movement: the rainbow of social movements; education activists; the trade unions; police, prison, and war resisters; climate justice advocates internationalists; debt abolitionists; and so on. Because of Occupy, a newfound momentum, energy, and sense of realignment flowed into each of these communities. But contributors were also asked to think beyond the immediate horizon. Despite the broad scope and appeal of the 99% umbrella, there is still a huge gulf between the mobilized core of participants and the mass of the population. How far beyond Occupy’s comfort zone can its tactics, ideas, and cultural norms travel?

This last question has been sharpened by the dramatic revival of OWS’s principle of mutual aid in the wake of Hurricane Sandy’s impact on New Jersey and New York. Occupy Sandy, a spontaneous direct relief effort aimed at the stranded and largely abandoned coastal populations of New York City, was the first and most effective response to the disaster, far outpacing the traditional agencies of the Red Cross and FEMA. Not a few concluded that local, community-minded initiatives of this sort were the best expression of the Occupy ethos of people- caring, and proof that the Zuccotti Park prototype could be spun out into a resilient outreach program, far beyond the traditional OWS constituency.

At the same time, Strike Debt, the OWS-offshoot group, launched its “Rolling Jubilee” initiative, aimed at buying up distressed debt for pennies on the dollar, and abolishing it, thereby depriving collectors the chance to extract the full amount through coercion. This project was designed to expose the predatory nature of the debt system, but it was also an exercise in mutual aid, which many interpreted as a horizontal form of debt relief. The Rolling Jubilee is already a runaway success—$450,000 was raised in just the initial two weeks to eliminate nine  million dollars worth of debt. Such participation demonstrates how widespread the appetite still is for striking at the power core of Wall Street.

Both of these developments (heralding the long-awaited Occupy 2.0) offer evidence that the innovative organizing energies released in the fall of 2011 are still in circulation, albeit now more focused on their impact than during their OWS debut.

« Their Fight Is Our Fight: Occupy Wall Street, the Arab Spring, and New Modes of Solidarity Today
»